After wonderful days of holiday within holiday we started to have an itchy feet :) and decided to move on. Drove again through the swamp (instead of taking beach road which you need permit for). We put some more air in the tires and soon we were on N1 again... 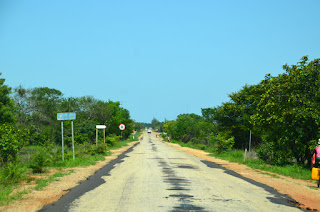 We crossed river Save which starts in Zimbabwe, it divides Mozambique politically: South of Save is considered FRELIMO stronghold and North of Save is more supportive of RENAMO. We noticed that the road got significantly worse as we got closer towards Beira. As FRELIMO is the leading political party in Mozambique but opposition party RENAMO is popular in Beira therefore this region doesn't get enough funding for infrastructure etc.
The bridge over Save river: 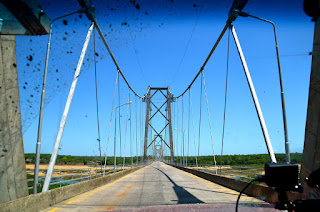 We crossed few more rivers, all bridges were in good condition. In January 2015 there were devastating floods in the Northern Mozambique and couple of bridges were swept away, many people stranded for weeks. 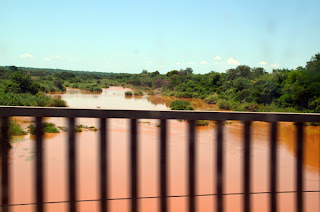 We got to Inchope which is a busy junction, because two major roads intersect here: N6 that connects Zimbabwe and goes to Beira which is port city and N1 - main road in Mozambique. Here you can find markets, food stalls, restaurants with cheap and fresh food. 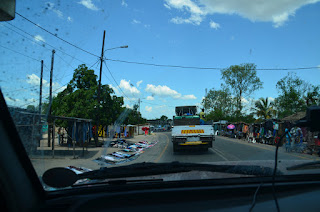 And some poor animals stacked on the roofs of the car: 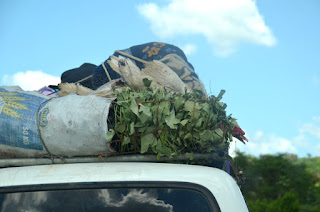 Getting closer to Beira there were lots of heavy trucks on the roads and many potholes: 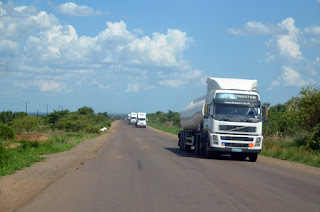 And then zig-zagging started: 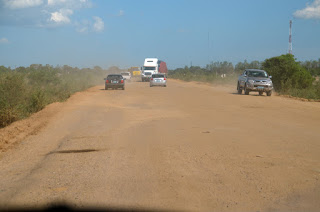 And lots of Chinese in Africa, here you can see him supervising locals at work: 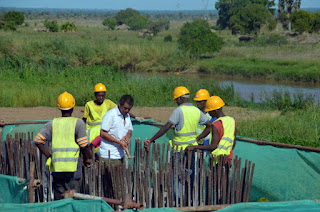 They were building new bridge: 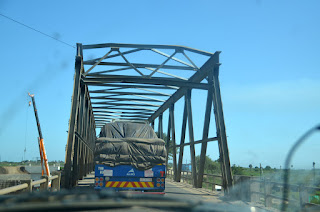 As we got in Beira, loads and loads of markets in the outskirts: 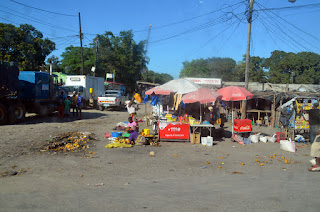 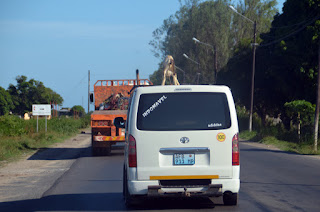 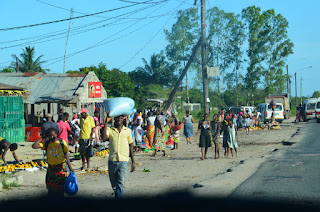 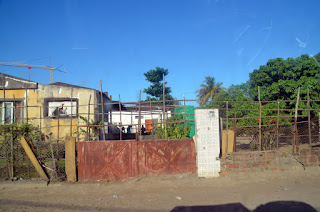 Mozambique is third largest charcoal producer in Africa (after Nigeria and Ethiopia). Due to urban expansion there has been rapid growth of charcoal consumption: 80% of mozambicans use charcoal for their daily cooking. That also is the main reason for deforestation, which we saw everywhere we travelled in the country: sadly the forests were chopped and burned down. We could see long line of men carrying charcoal on their bicycles all around Mozambique: 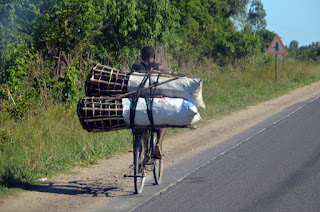 Getting closer to the centre of Beira, much construction in happening and many new complexes have been built: 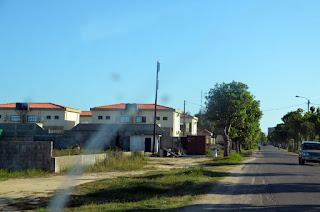 Hotel Dom Carlos lies in ruins and full of squatters: 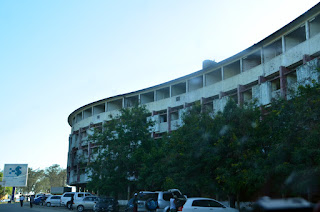 We were hosted by James from South Africa through Couchsurfing. He lives in Beira for few years and he built cement factory there. We met with his family and friends - most of them South Africans working in Mozambique - for dinner and exchanged great stories. We had our own room with air conditioner... mmm we were happy for that:) So we stayed for few days in Beira.

Posted by Sintija Jakane at 7:37 PM No comments:

We were staying in our favourite place in Mozambique. We set up our camp, the car was very dirty from the mud drive the night before. We did some washing, put awning out, solar panel. 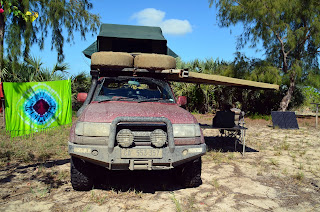 So we were chilling out this day... We went for a beautiful walks, met some very nice Afrikaner families, one of their vehicles was stuck in the sand while launching the fishing boat, so we helped them to get out. Later in the evening the man comes over with a big piece of barracuda for us, so that was our dinner tonight..... Our paradise beach looked like this: 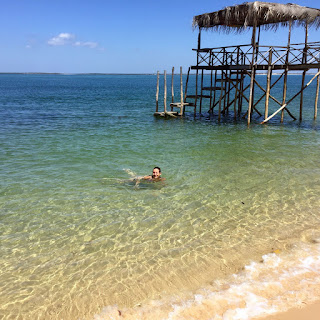 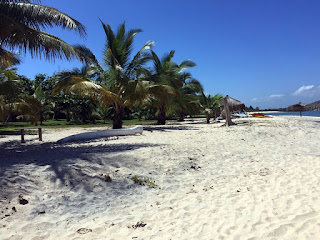 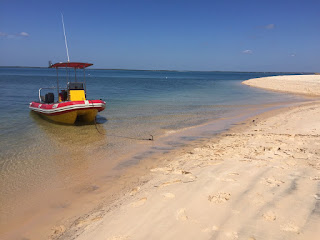 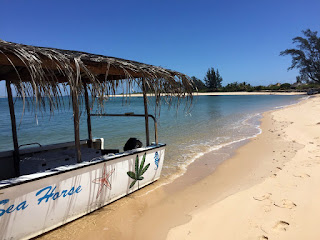 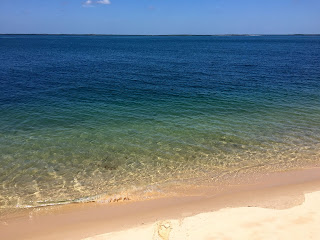 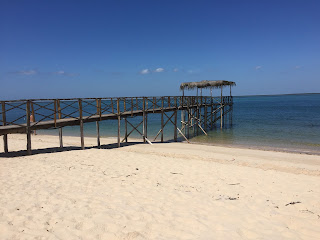 There was this huge tree with hundreds and hundreds of yellow Weavers making nests, and you couldn't believe how big noise such a small birds can make (starting at half past 3 in the morning) hahah :) And they have incredible skills of making their nests, we were watching them flying and looking for pieces of grass and building them.

Catch of the day - Ray fish 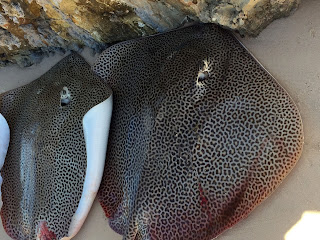 Another view of our campsite overlooking coco trees: 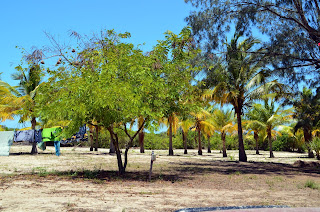 So we spent lots of time swimming and laying in the sun :) 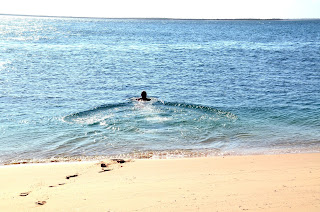 This was our shower in the camping, very athentic :) 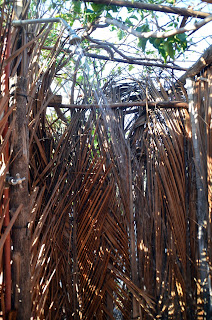 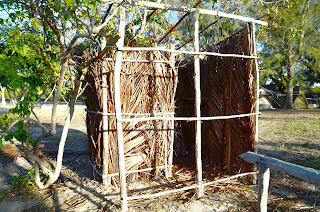 In the evening we cooked delicious barracuda! 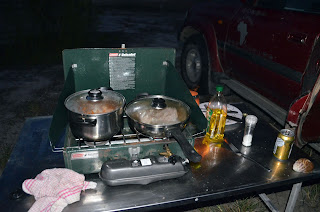 And for the dessert spectacular sunset: 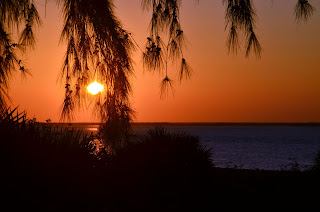 Posted by Sintija Jakane at 4:58 PM No comments: